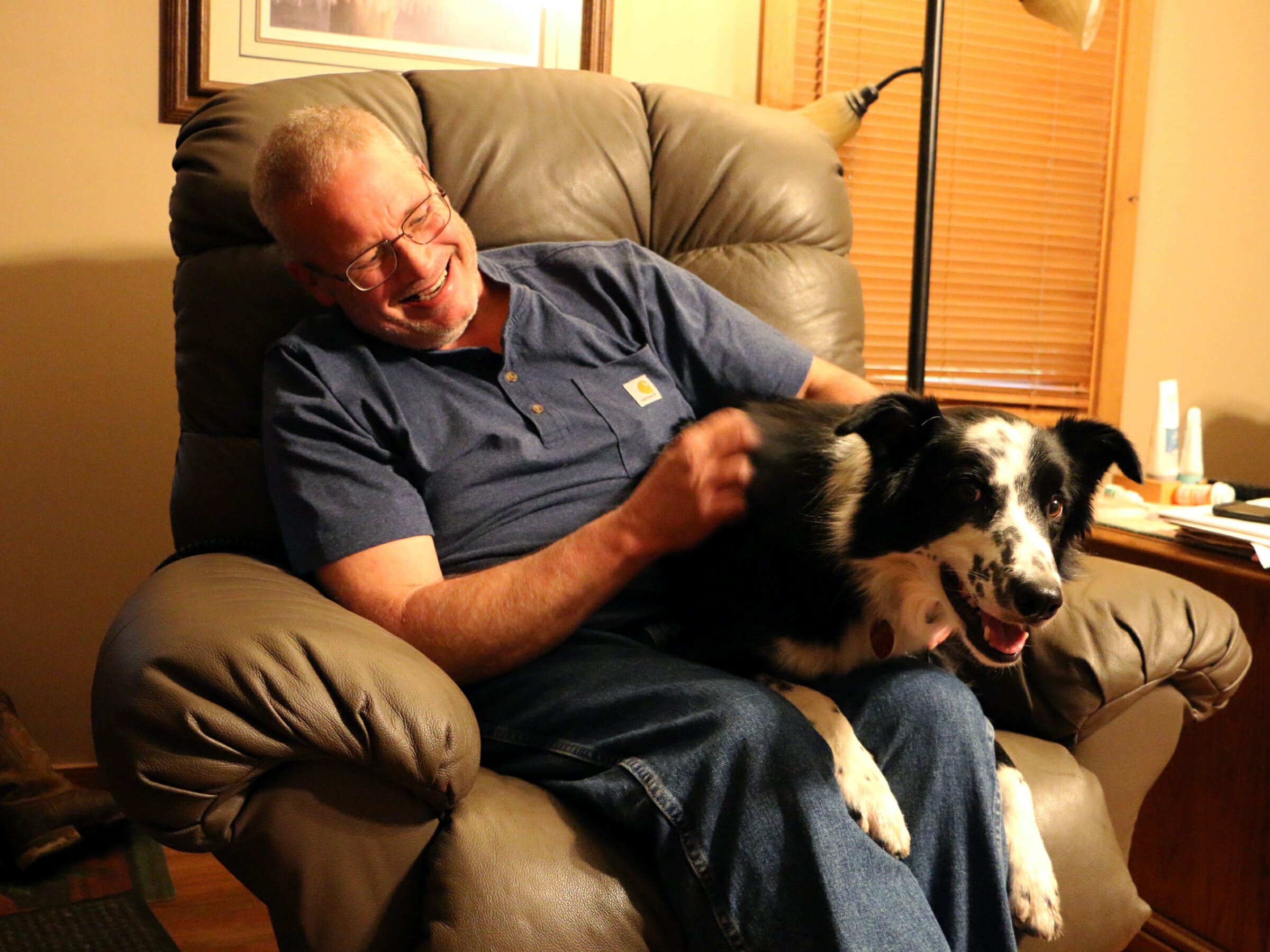 Living on a big hill several miles west of Baraboo, Wisconsin, Dave Seamans loves being outdoors. Even something like chopping firewood is hardly a chore to Dave. When nightfall comes, he often finds himself gazing at the stars—or at least he used to, before he gradually, and inexplicably, lost his vision over a 12-year period.

By 2018, Dave could barely see a pinpoint of light. He had been legally blind for three years due to optic neuropathy in both eyes. His body also felt like it was falling apart, and his unexplained collection of symptoms—including numbness in his limbs and difficulty walking—puzzled many physicians. “My symptoms mimicked those of someone with multiple sclerosis,” Dave says, “but I tested negative for MS.”

A 51-year-old U.S. Air Force veteran, Dave was not only depressed, but incredibly frustrated. He couldn’t get an answer to a simple question: Why is this happening? “I couldn’t see. My hands and feet were going numb all the time. I needed a cane or walker and I was dropping stuff all the time,” Dave says. “I just felt like I was breaking down.”

In May 2018, thanks to a referral from his primary care doctor, Dave saw Elizabeth Kellom, MS, CGC, a University of Wisconsin genetic counselor at the Waisman Center Medical Genetics Clinic in Madison for genetic screening for optic neuropathy. “I took Dave’s complete medical and family history,” says Elizabeth. “I initially suspected he might have late-onset Krabbe Disease, a rare and often deadly neurological disorder, because Dave had a niece who died of it.”

Ultimately, Elizabeth suggested Dave undergo whole exome sequencing—a comprehensive genetic examination of his DNA, the hereditary material in humans and almost all organisms. With merely a swab from the inside of his cheek (followed by a 6-week wait for results), the test would show whether any mutations, or abnormal changes, were present in Dave’s DNA that might explain his medical predicament. Insurance did not cover the test, but Dave agreed to pay for it out of pocket, which, in his case, cost more than $1,000.

The results pointed Elizabeth in the right direction. One more enzyme test confirmed that Dave had a rare genetic disorder called biotinidase deficiency, which occurs in about 1 in 60,000 people. “Virtually all of us,” says Elizabeth, “have an enzyme called biotinidase, which helps our bodies recycle a B-vitamin known as biotin, which we need for our metabolism to function properly. If you can’t recycle biotin,” she says, “you typically suffer from a variety of debilitating symptoms.”

“Years ago—before biotinidase deficiency was even identified—babies who lacked biotinidase typically presented with severe neurological problems, including seizures and developmental delay, and sometimes eye problems or hearing loss,” says Elizabeth. Some of these children did not survive. “Today, however,” Elizabeth says, “every baby across the country is tested for biotinidase deficiency as part of newborn screening. If a baby tests positive, he or she is given biotin supplementation, which is taken for life. If treated right away, the symptoms never even show up.”

Dave, unfortunately, was born too early to have his condition picked up in infancy. It was not until 1982 that a medical geneticist named Barry Wolf, MD, first identified biotinidase deficiency and not until many years later that newborns in every state were tested for it.

“At age 51, Dave is the oldest known living patient with biotinidase deficiency,” says Dr. Wolf, emeritus chair of medical genetics at Henry Ford Hospital in Detroit and currently professor of Genetics, Birth defects and Metabolic Disease at Lurie Children’s Hospital in Chicago. Dr. Wolf doesn’t know why Dave and his brother, Wayne—who also tested positive but did not lose his vision—escaped the symptoms of biotinidase deficiency as children.

“One theory is that drinking as much milk as they did while growing up kept the symptoms at bay for many years.” Since biotin supplementation is the standard treatment for infants who test positive for biotinidase deficiency, Elizabeth—in consultation with UW medical geneticist Greg Rice, MD— encouraged Dave to try it himself.

“Since Dave lived with this condition for 50 years,” Elizabeth says, “I could not promise that biotin supplementation would help him the way it helps newborns, yet I knew he had nothing to lose.” In early July 2018—just two weeks after picking up a jar of biotin at Costco—the man who grew up staring at constellations of stars literally could not believe his own eyes.

“Before taking biotin, I might be able to see one star if I’m lucky,” Dave says. “Two weeks later, I looked up one night and saw the whole big dipper. I couldn’t stop bawling my eyes out.” Dave could hardly believe what he saw, and when he told Elizabeth, she could hardly believe what she heard. “The whole Genetics Department at the Waisman Center was buzzing,” she says. “In our field, a diagnosis helps people manage their condition. Rarely can we use our findings to literally change someone’s life like Dave’s.”

Kimberly Stepien, MD, a UW Health ophthalmologist and director of the Adult Inherited Retinal Disease Clinic, said Dave’s case beautifully illustrates the power of genetic testing. “Elizabeth is the true hero in this story,” says Dr. Stepien. “She took the time to get a very thorough history and understood that we needed more than standard genetic optic neuropathy screening. Of course, Dave’s willingness to pay for the whole exome sequencing was also critical.” At the same time, Dr. Stepien cautions people with poor vision not to run to the pharmacy for biotin supplements too quickly.

“People can experience vision loss from a variety of conditions including diseases such as macular degeneration or diabetic retinopathy,” she says, “and sadly, biotin supplement is not going to help those patients.”

Still, she will never forget Dave Seamans and his remarkable turnaround. “It was amazing to see how his visual fields, along with his other systemic symptoms, improved over the next few months after he started his supplements. It’s an ophthalmologist’s dream to help someone see again. It’s what gets us up in the morning every day.”

A Short but Sweet Note

Dr. Barry Wolf, the 72-year-old medical genetics pioneer who first identified biotinidase deficiency 37 years ago, cherishes the friendship he has
cultivated with Dave over the past two years. “Dave sent me a note last year that means more to me than he’ll ever know,” says Dr. Wolf. “I pull it
out whenever I need a little boost.”

Short and sweet, Dave’s note reads as follows: “Dr. Wolf—Six months ago, I was legally blind. Now I am driving. Your life’s work has saved my life. My family and I are eternally grateful. Dave.”

Made in Madison by Dirigible Studio